What Is a Biphasic Curve and What Does It Suggest About Metabolic Health?

If you monitor your glucose levels, you may have noticed a double spike after eating. Known as a biphasic curve, it’s completely normal — and may offer insights into your metabolic health. 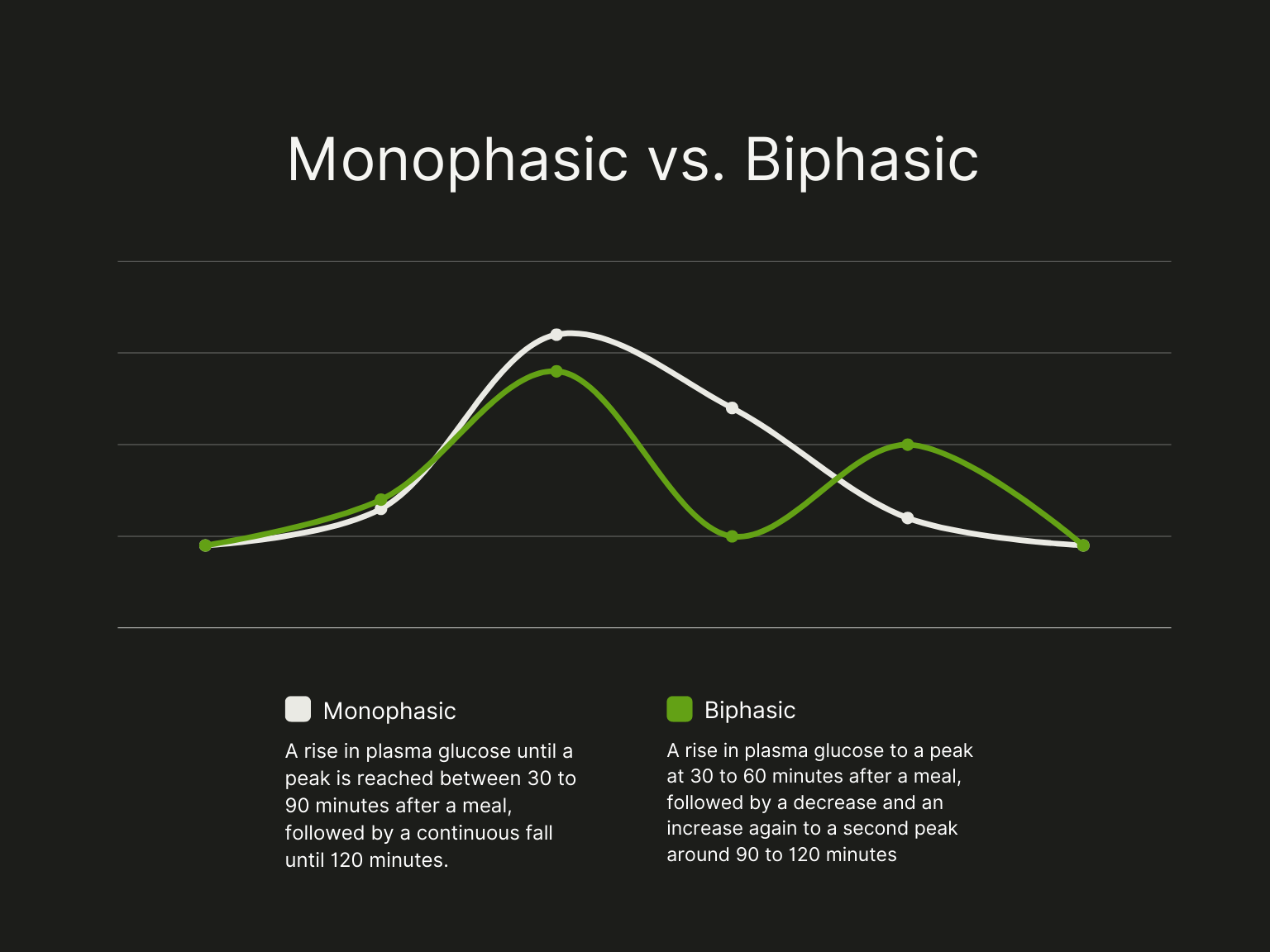 The Mechanism Behind Monophasic and Biphasic Curves

To understand why you may see a monophasic or biphasic curve following a meal, it’s important to first understand the role of insulin in glucose metabolism. After you eat and glucose enters the bloodstream, insulin is secreted in a dynamic process to shuttle glucose out of the bloodstream and into your cells. Insulin is released from beta cells in the pancreas and is the key hormone in keeping your blood sugar balanced.

Insulin is secreted in two phases to most effectively reduce blood glucose levels. The first phase of insulin release occurs rapidly and lasts for only a few minutes, while the second phase occurs later and is more sustained.

On the other hand, a biphasic curve may be a result of better insulin secretion in the first phase in addition to improved insulin sensitivity, which creates two peaks.

What Does the Research Say About Biphasic Curves?

One study investigated the relationship between the shape of a glucose concentration curve, different metabolic risk profiles, and risk of T2D [3]. A cohort of 121 adult subjects underwent an oral glucose tolerance test (OGTT) and were assigned to either a monophasic or biphasic glucose response group.

Researchers found that those with a monophasic curve following an OGTT tended to have higher fasting and 2-hour plasma glucose levels, lower insulin sensitivity, and impaired beta-cell function. These results suggest that those with a monophasic curve are less metabolically healthy and exhibit a higher risk of pre-diabetes and metabolic syndrome. The biphasic curve group was associated with better health outcomes, lower fasting insulin, higher insulin sensitivity, and a lower body mass index (5).

Another study looked at the shape of a glucose response curve to an oral glucose tolerance test in 277 obese adolescents without diabetes [4]. Subjects were categorized into a monophasic or biphasic response group based on which curve type they experienced following a 2-hour OGTT. Researchers found that the monophasic curve group had significantly lower insulin sensitivity and beta-cell function in comparison to the biphasic group. These are two significant biomarkers of T2D, signifying a higher risk for metabolic syndrome [4].

While we can identify trends in research about biphasic curves, it’s important to keep in mind that this research is still evolving and there is not one concrete conclusion. The majority of research on this topic has been done in people with T2D or impaired glucose control. More research is needed in healthy subjects to gain further insights into the significance of glucose curve shapes.

If you experience monophasic curves, the best thing you can do is pay attention to your nutrition, sleep, and exercise. Tracking your glucose with a CGM and habits within the Veri app provide a useful platform to better identify patterns and rectify health-harming behaviors.